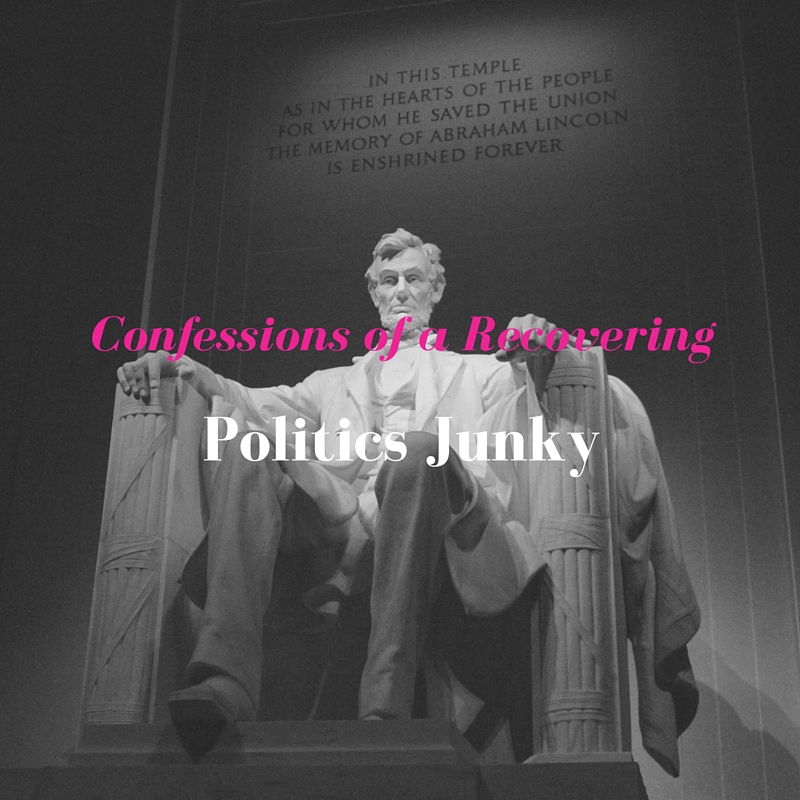 Confessions Of A Recovering Politics Junky

Once upon a time I was really into politics. The radio or television was on some news channel pretty much the whole day, and I would spend large amounts of time reading news sites online. I thought about politics all the time.

My mind was constantly churning with thoughts of all that was wrong in world, and what would fix it. Of course I had the answers, if only anyone would listen. (Ahem)

One election cycle several years ago, I remember becoming so emotionally invested in the election and in my preferred candidate that I had a physical reaction when that candidate dropped out.

It occurred to later that maybe this wasn’t good. Staying informed is one thing, but I had taken it to an unhealthy level.

So I quit it all.

I stopped turning on the radio, and the television. I stopped checking all those news sites. I stopped obsessing.

I still manage to keep more or less up to speed with what’s going on in the world, but I don’t spend hours a day on it.

That said, this current election cycle is driving me bonkers. I really just want to go to sleep and wake up it find it all over with. While I do tend to be impatient, there’s more to it than that.

It seems almost impossible to avoid being bombarded with vast amounts of information. A lot of which is frankly contradictory. It feels like an impossible task to wade through all of it to find the truth.

Of course there are lots of people lining up to tell us who Jesus would vote for. Or who he wouldn’t vote for.

I’ve thought about that question too.

I don’t think He would tell us not to vote, but getting involved in politics just wasn’t what He was here for. He told us as much.

If Jesus had come to earth in the United States in 2016, I have no doubt that His followers, especially Peter, would expect Him to run for president. His answer now would be the same as was then, when He tried to prepare His disciples for the cross and Peter protested, still thinking Christ had come to save Israel from Roman rule.

But he turned, and said unto Peter, Get thee behind me, Satan: thou art an offence unto me: for thou savourest not the things that be of God, but those that be of men. Matthew 16:23

While I don’t believe Jesus would tell His followers who to vote for, or who not to vote for, I do think He would ask us some very pointed questions. One of them would be, “Why did you chose that person to vote for?”

Not in an attempt to point us to the right candidate, but to help us understand our own motivations. Because the “why” in this case might matter more the “who.”

What is driving us? What are we looking for? In whom are we ultimately putting our trust?

So many of us seem to be looking for a Messiah. Someone who will save this country from the evils of crony capitalism, the gay rights agenda, social injustice, or any number of other bogymen. They’re sure changing the occupant of the White House will fix everything that’s wrong.

Except the man in the White House didn’t cause all of our nations problems.

The occupant of the White House is only a reflection of who we have become as a nation. It doesn’t matter whether we agree with him or not. If we feel that some of the things he has done are contrary to the Word of God, and reflect badly on our nation, we have only ourselves to blame. Not because we voted for him, or because we sat out the election, but because we haven’t been the salt and light that we are supposed to be.

Along the way we’ve put our trust in our leaders instead of God. And now we feel betrayed. Is it any wonder? Our fellow human beings will always let us down. They will lie to us and make promises they have no intention of keeping. Even the most trustworthy ones can make sincere promises that they find out later they can’t keep.

But the problem isn’t the men we vote for, as much as us putting our trust in the wrong place to begin with.

The Lord is my shepherd, I shall not want another shepherd

Several years ago our pastor made a statement while he was preaching on Psalm twenty-three that has stuck with me. He said, “The Lord is my shepherd; I shall not want… another shepherd.”

We’ve wanted another shepherd for a long time now. We keep looking to men for the answers to the problems only The Savior can solve. We believe their lies because they say what we want to hear.

I think sometimes our over reliance on worldly leadership is a rejection of God’s leadership.

I’m not saying that we shouldn’t vote or participate in our democratic processes. I think we should participate. The right to elect our leader is a privilege most people around the world don’t have

But we should be careful about putting too much of our hopes in those we elect. We shouldn’t become emotionally invested the way I did when my stomach churned because my favorite dropped out. And we shouldn’t put all of the responsibility for the state of the nation on their shoulders.

No one forces us to live the way we do, and the right to proclaim the Gospel freely is also a privilege a lot of the rest of the world doesn’t have. We shouldn’t take it for granted or neglect it with disuse.

Once upon a time, the nation of Israel wanted another shepherd too. They had their choice and they chose Saul. I imagine at least some of them felt betrayed.

8 Scriptures for when you feel alone