How I Sleep In On Christmas Morning: with a free printable

I honestly don’t mind getting up early with my kids on Christmas morning. I enjoy watching their excitement. But sometimes, like when there is illness in the family, or you have a new baby, or are expecting a new baby the week after Christmas, you just need to rest.

That doesn’t mean the kids have to miss out on Christmas morning fun.

But, I did manage to get a few extra winks compared to other Christmas mornings. 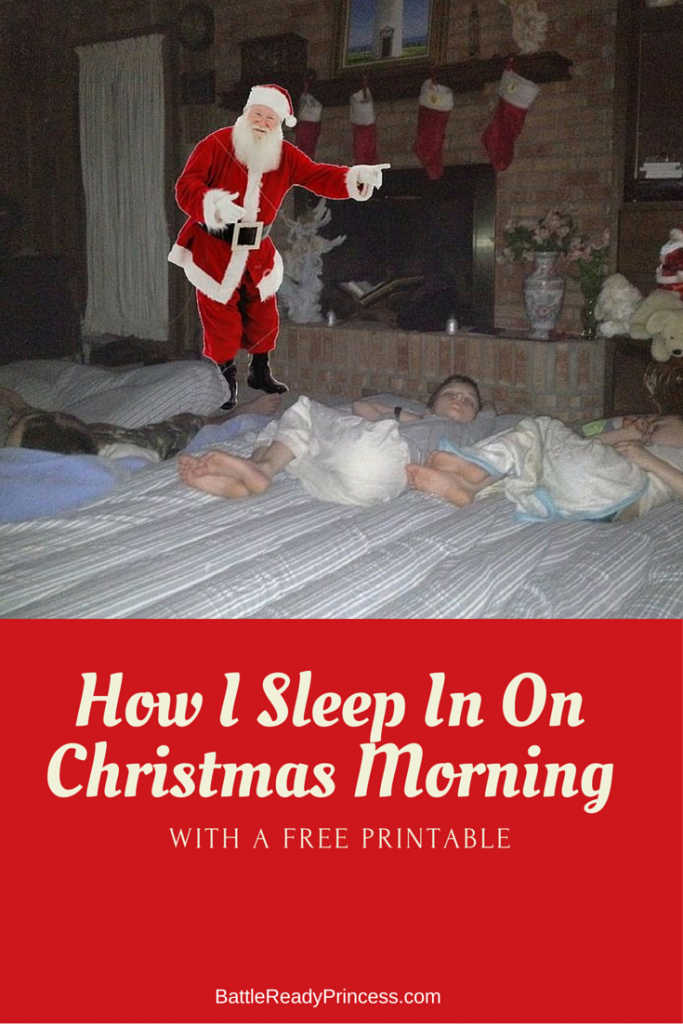 I started this tradition two years ago and I plan to keep it going this year. I think adds another element of fun to the morning as well as the benefit of a few more minutes of rest.

Two years ago my husband was hospitalized a few weeks before Christmas for a blood infection. He was sent home after a few days, but he had to make daily trips to the hospital to receive IV antibiotics. Yes, that included Christmas day.

(This time of year, health care workers, E.M.S, and police work just as hard as they do the rest of the year. Often without being thanked. Consider doing something nice for those serving in your community.)

At the time our youngest was just shy of a year old and still getting up several times a night. Sleep was a precious commodity. I knew my husband needed as much rest as possible, so I devised a plan.

I started with food.

I knew that we would have to leave for the hospital soon after all the gifts were unwrapped that morning, and wanted my kids to have eaten before we left. That was my main reason for doing this.

I picked up some cinnamon rolls from the bakery, and Christmas party ware. I stashed some eggnog in the fridge and set up the coffee pot to have hot water ready for making hot chocolate. I threw in some special holiday marshmallows for good measure.

Obviously if your kids aren’t old enough to handle hot beverages on their own you would skip that. You could add juice boxes instead, or have individual chocolate milks on hand. You could include Danish or muffins instead of cinnamon rolls, whatever your kids favorites are.

Next I threw in a game.

Two years ago it was Farkle. Last year I picked twister. Not sure yet about this year.

It really doesn’t matter what the game is. It could be one they’ve played at a friend’s house and have been asking for, or it could be one they haven’t seen before. It just needs to something that they can all play. Or someone gets left out of the fun.

If your kids are close in age and have the same interests, you could include something besides a game. A LEGO set or beading kit. You could also include individual treat bags with a few party favor type trinkets in them.

Then it was time to wrap it all up.

I found a big box that everything would fit in, and wrapped it in such a way that they could just open the box without unwrapping it. I don’t remember why I wanted to do it that way, it certainly isn’t necessary.

If I had been thinking far enough ahead I would have found a box with a lid and wrapped the box and lid separately. But I didn’t think of that in time so I had to do the hard way.

I have no tips on doing it the hard way other than: don’t do it. Find a box with a lid. Basically what I did was fold the two sort sides of the box inside and tape them down. Then I wrapped the two long sides while they were folded out so they would be movable.

You could also just wrap it normally.

I used the fanciest paper I could find, and added the biggest bow I could find. I wanted this present to stand out. I wanted it to look like it was special.

I wanted to make sure my kids knew to open this box right away, but I wanted to a special way to say it.

In our house Santa Clause is a fictional character. We do talk about Santa, but everyone knows he’s pretend. We want our celebration to be about the birth of Christ, so Santa takes a back seat. But he’s not banned.

Since I wanted this to fun as well as practical, I made this present from “Santa.” I had “Santa” leave this little poem on the box explaining what to do, and added another reminder of what Christmas is about. There is a printable version below, or you can create your own.

It’s Christmas morning and Mom and Dad are late!
But don’t worry; I’ve worked it out.
Have some breakfast and play a game while you wait.
That’s the way to stop your pout!
Inside this box is all you need.
Open up NOW to start the fun!
Keep this in mind while you play
Christmas isn’t about what you get
There’s a better reason for this day!
I hope you wont forget…

“Unto you is born this day in the city of David a Saviour, which is Christ the Lord.”

Of course we could have just ordered them not to disturb us until a certain time, and they would have obeyed, but I wanted to make it fun. There was the whole getting breakfast out of the way thing too.

Has your family started any new traditions? I would love to hear about them.

Get your printable poem here.

I’m linking up with Home For The Holidays, and From House to Home

Giving Thanks In Dificult Seasons