Is there one sin that’s worse than every other sin?

Is there one sin that’s worse than every other sin?

If there were, what would it be? 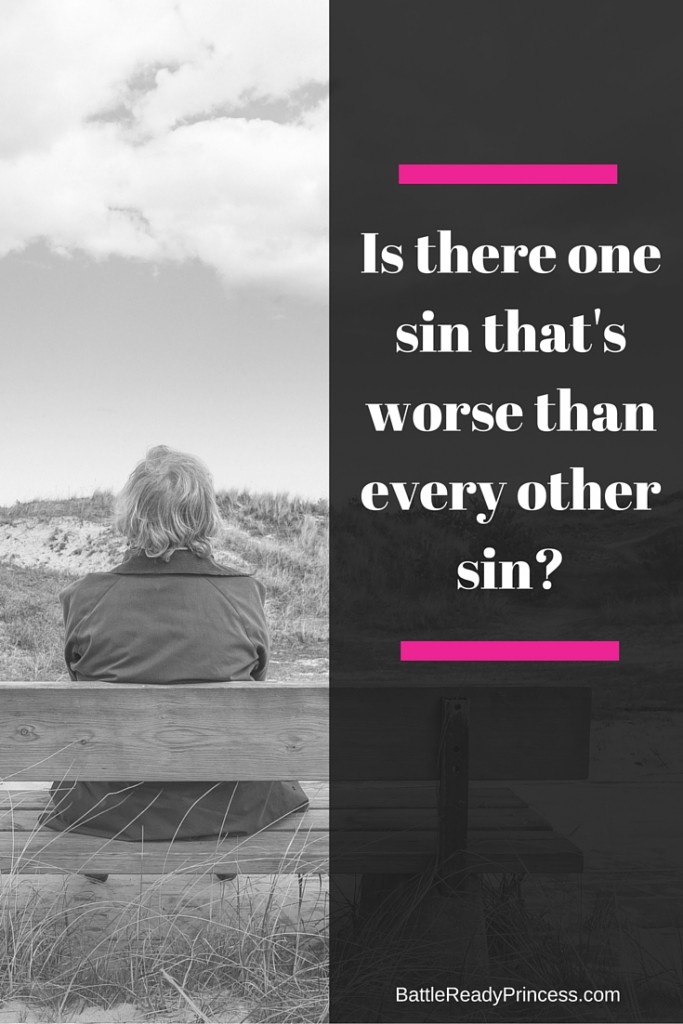 Until the other day I had never seriously considered that question. All sin separates us from God. In that sense, it doesn’t matter what that sin is, we’re still cut off from enjoying a relationship with Him while we are living in our sin.

But is there one sin that God finds particularly annoying?

Is one sin worse than all the others?

This thought crossed my mind while was reading recently in Matthew.

I’ve been studying the Gospels a lot recently. Lately I’ve had an intense desire in me to truly know My Savior. Not just the many great works He did while He walked this Earth, but who He is. No matter what else I might be studying, I find I just keep coming back to these four books.

Modern teachers like to paint Jesus as a happy-go-lucky, peace-nick who staged hug-ins between healing services and fish fries.

But that’s not the Jesus I find when studying the gospels.

Yes, He healed the sick. Yes, He fed the hungry. But He was so much more than just what He did.

And He wasn’t happy all the time.

I see Him getting frustrated with His disciples when they were unable to cast out a demon. (Luke 9:41)

There’s the well-known incident in the temple. (John 2:14-16) If that happened today, Jesus would be arrested for assault and destruction of property, and made to attend anger management classes. Twitter would blow up with cell phone videos and people wondering why He had snapped, and hopping He got help.

Clearly Jesus had a full range of emotions.

But, as I was reading in Matthew twenty-three, I was struck by Jesus’ reaction to the Pharisees. Over and over, these men tried to trip Jesus up by asking Him trick questions. Of course they never succeeded. After they had finally given up, Jesus lit into them big time, calling them hypocrites multiple times. He even called them vipers.

In the modern picture of Jesus, how can this be? Did Jesus not love the Pharisees? How could He verbally abuse them that way if He loved them?

Of course Jesus loved the Pharisees. He loved the moneychangers too. Just like he loves you and me.

But, loving someone doesn’t mean you approve of every thing they do. If you have children you know this is true.

Jesus experienced all of the same emotions we do. The difference is, He didn’t act on them in the uncontrolled way we do. And He was never angry without cause.

So, what cause did he have to be angry with the Pharisees?

In the gospel of Mark, there’s a clue. In the third chapter, Jesus was in the synagogue on the Sabbath, when He encounters a man with a withered hand. The Pharisees were there watching to see if would heal the man on the Sabbath, hoping to find something to accuse Him of.

Jesus knew what they were thinking, so He asked them, “Is it lawful to do good on the Sabbath days?” But the Pharisees didn’t answer. Jesus looked at them with anger, “being grieved for the hardness of their hearts.” (Mark 3:1-5)

It was the hardness of their hearts that caused Jesus to be grieved, and angry.

But is a hard heart a sin?

No, a heard heart isn’t a sin. It’s a symptom of sin. There was one sin in particular that was the cause of the Pharisees hard hearts.

Why would pride be worse than any other sin?

So, why would pride be worse than any other sin?

First, it sets us above God in our own minds. We become our own idols, and worship ourselves instead of God. What was the first commandment God gave when giving Moses the Ten Commandments?

Thou shalt have no other gods before me. Exodus 20:3

This was serious enough to God to make it the first commandment. He didn’t mean, “no other gods, except yourself.”

This is exactly what got Satan dismissed from the presence of God.

How art thou fallen from heaven, O Lucifer, son of the morning! how art thou cut down to the ground, which didst weaken the nations! For thou hast said in thine heart, I will ascend into heaven, I will exalt my throne above the stars of God: I will sit also upon the mount of the congregation, in the sides of the north: Isaiah 14:12-13 (Emphasis added)

The second reason is the one that caused Jesus to grieve that day. Our pride keeps us from coming to Him. Our unwillingness to humble ourselves keeps us at a distance.

If we’ve made ourselves gods, we don’t need the one true God. If we can’t admit wrongdoing, we won’t ask for forgiveness. And if we can’t admit that we need a Savior, our path to salvation is blocked. Jesus said it this way:

he said unto them, They that be whole need not a physician, but they that are sick. Matthew 9:12

Another reason God may find the sin of pride so abhorrent is that our pride can keep others from coming to Him. The Pharisees stubborn clinging to their own ideas, kept people in darkness. For us, our pride puts a barrier, not only between us and God, but between us and those around us.

We damage our testimony when we, won’t ask forgiveness. Or when we continue in sin, which is declaring that we know better than God. Or when we claim we are enough on our own.

In the next couple of weeks I hope to write a post or two on what the sin of pride looks like and why I think it is the most common sin.

Did I really just ask to go back to Egypt?

Marriage is tricky. I can’t write about that.