The Question No One Would Have Asked

To my knowledge, none of these businesses refused to homosexuals at all, they just declined to have a part in their weddings. There’s an important distinction.

The right for men to marry men, and women to marry women has now been declared a human right. And the militant left will defend human rights that are moral wrongs as though there were no higher cause.

They’ll tell conservative Christians that not participating in these events is un-christian. They’ll say that the Christian baker should bake the cake for the gay wedding because it’s what Jesus would have done.

I don’t think He would have, for one simple reason, no one would have asked Him to.

They knew better. Not because times were different. Read up on that period in history and you’ll see that things weren’t really all that different. No, Christ Himself is the reason no one would have asked.

Of course we know that Christ lived a sinless life, but we rarely think about how His perfection affected those around Him. He didn’t just preach righteousness He lived it. It was part of who he was. There was no hint of hypocrisy in Him, and everyone around Him knew it. All those who encountered Christ would have seen their own sinfulness reflected in His lifestyle, and without Him uttering one single word, been convicted. You see this in the way the people He encountered approached Him.

The humble came to Him seeking forgiveness, while the proud came looking for justification.

We see many times Pharisees and others coming to Jesus trying to explain away their sins, or have Jesus explain them away for them, but never once do we see anyone saying, “Yes, I know this is sin. Would you please bless my sin?” Or, “I know you said this is sin, but I don’t think it is sin so bless me already.” Which, essentially, is what gay couples that ask people to participate in their weddings are asking.

We don’t see it that way because we don’t view weddings as the sacred and solemn events that they are. We see weddings as parties.

Yes, it’s a celebration, but a sacred one that should be approached with as much seriousness as taking the witness stand in court. Would you testify in court on behalf of someone you knew was guilty? Would be willing to swear under oath that they weren’t? Would you ask some who knew you were guilty to swear that you weren’t?

Not if you wanted to be considered a person of integrity. 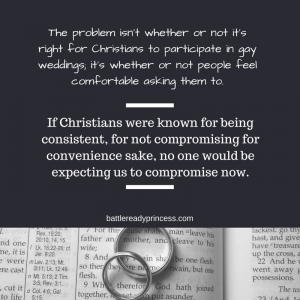 The problem isn’t whether or not it’s right for Christians to participate in gay weddings; it’s whether or not people feel comfortable asking them to.

We as Christians are often very good at preaching righteousness, but fall sort when actually living it. We teach our children that lying is sin, while we tell the boss we’re taking a sick day, when we’re really just goofing off. We say that it’s wrong to steal, but neglect to mention that side income on our tax forms. We preach against extra marital sex, but tune in to watch it on television every night. Or pay a small fortune to watch it on the big screen.

I strongly suspect that none of the Christian businesses under fire for not participating in a same sex wedding have ever enquired whether either of the participants in a traditional wedding has ever been divorced. Despite the fact that Christ himself said not to divorce, and not to remarry if you are divorced.

I wonder if they would refuse to participate in a divorce party. Yes, that’s real thing.

I’m not picking on divorced people. I have plenty of my own faults. I understand, sometimes divorce is unavoidable, and it’s hard to be alone. But can’t the homosexual say the same?

Am I criticizing those businesses for taking the stand that they did? No, not at all. They simply reached a line they wouldn’t cross. But the secular world doesn’t understand that line.

If Christians were known for being consistent, for not compromising for convenience sake, no one would be expecting us to compromise now.

But aren’t we supposed to love people the way Jesus did? Yes, but loving someone doesn’t mean we condone bad behavior, or participate in it.

We don’t have to shun people either. Jesus ate with sinners, but he didn’t adopt their sinful lifestyles. They were changed by his presence, not the other way around.

After an encounter with Christ, Zacchaeus was moved to make right his past wrongs. (Luke 19:1-10) In verses 9 and 10 we see Jesus’ joyful response:

And Jesus said unto him, This day is salvation come to this house, forsomuch as he also is a son of Abraham. For the Son of man is come to seek and to save that which was lost. (Luke 19:9-10)

He said this is why I came. To rescue the perishing. To turn them from darkness to light. He gives us that same commission, to be the light of the world. (Matthew 5:14)

But, the light isn’t light if it looks and acts just like the darkness. 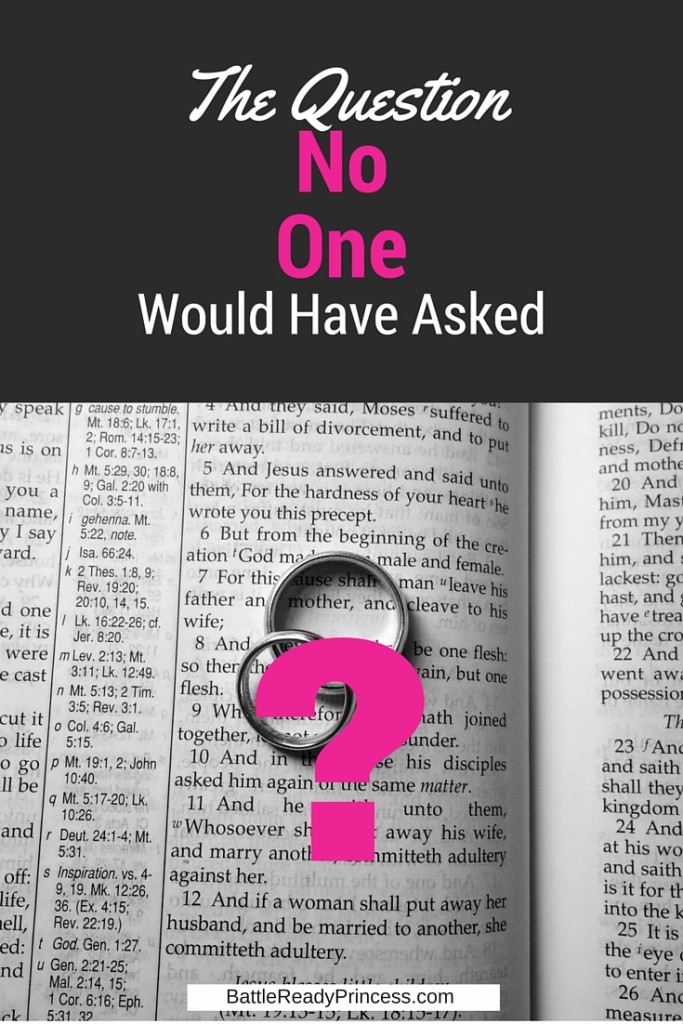 What’s distracting you from your purpose?

Dear Sisters, We are all called to fight