When the story is hard to tell

So far I haven’t used this space share many details about my family’s struggles over the past three years. We tend to be very private people, my husband most of all.

The stories of my life are not mine only. They also belong to the people I share my life with.

In the era of social media, when there are tons of Facebook pages giving play by plays of someone’s journey with cancer or recovery from a car accident, we often feel as though we have right to everyone’s personal information.

At the same time we don’t want people in our business.

We put our lives on display for the whole world to see, and then tell the world they have no business commenting on our lives. And don’t even think about doing anything that could be remotely considered  “judging.” Even though they’ve just changed their relationship status for the sixth time in as many months. Don’t judge.

It’s hard for us to admit that not every story needs to be told. Not every moment needs to be shared with the whole world. Sometimes it’s better to do as Mary did after Jesus’ birth and keep some stories in our hearts. (Luke 2:19)

This is especially true if we don’t want someone talking about it.

There seems to be little discernment about what should be shared and what shouldn’t.

We so easily share the smallest, and sometimes quite personal, details of our lives with the world, and then bury deep the things that matter. We’ve become so used to having our lives commented on that we hear the judgment before we utter one word. We so desperately want to be understood and accepted, and equally fear being misunderstood and rejected. And we’re afraid of appearing weak.

But some stories do need to be shared.

As much as I don’t want to, as much as it still hurts to even think about, I think I have to tell this story. Mostly because everything I write will be influenced by it, whether I want it to be or not.

There’s no pretending it didn’t happen, at least not for very long.

And I can’t get around this. 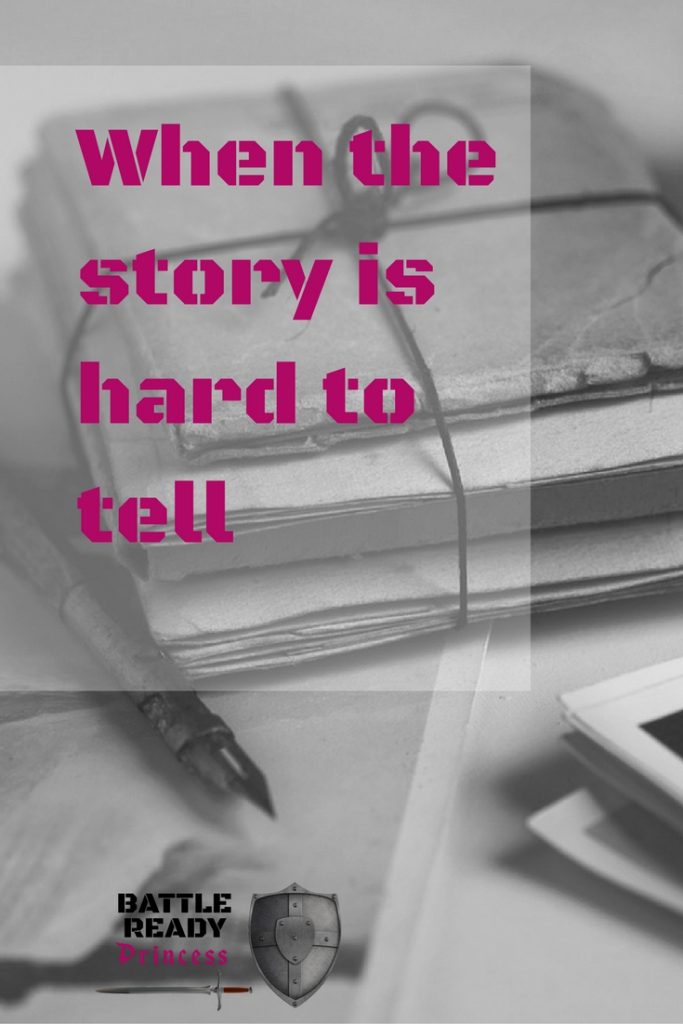 Almost three and a half years ago my husband was diagnosed with cancer. Based on the type of cancer he had, and the fact that the scans showed no cancer anywhere else, the doctors assured us it would be a relatively quick fix. They would do surgery and everything would be fine.

But that’s not how it went.

The surgery ended up being more extensive than the doctors originally thought. Which meant a longer recovery and more surgery later. The biopsy showed the cancer had spread to his lymph nodes so chemotherapy would be needed.

Because healing from the surgery took longer than expected, the start of the chemotherapy was delayed. In the meantime the oncologist sent him for more scans. We were told they were clear.

They told us that the type of chemo they would use wasn’t the “really bad kind.” The side effects were supposed to be minimal. For my husband the opposite was true. They actually had to stop the chemo because of the effects.

Over the next several months, there was more surgery and a serious blood infection. Then we found out that the scans form the year before were not clear after all. The cancer was in his lungs.

Later we would learn that it was also in his liver. One or the other might be manageable, but both was another story. We saw more doctors and he endured more surgeries and procedures along with more chemotherapy.

For the next year and half or so things pretty much stayed the same. The chemotherapy was keeping the cancer at bay, and my husband usually knew he could count on at least a few good days every cycle.

But then things changed, and they changed fast. We were told the cancer was showing signs of growth. They decided to change his chemotherapy. But before he ever really started the new regimen, a weakness set in that he couldn’t shake.

When he finally saw the doctor again, he told us there would be no more treatments. A week or so later he went to the hospital feeling short of breath. The doctors there confirmed what we had already been told. There was nothing they could do. In fact he only got worse.

After ten days in the hospital my husband was sent home with hospice care. As I drove home ahead of the ambulance he was being transported in, a line from a song was running through my head.

I couldn’t remember what song it as from, who sang or where I’d heard it, but that one stanza became my prayer that afternoon.

I didn’t fully understand yet just what that snippet of a song that became a prayer would mean in the coming days. But it would be a comfort as well as a reminder that God is sufficient.

Just a few short hours after settling in at home, my husband took his last labored breaths here on earth and passed into glory.

No one expected it to happen that quickly. Even the hospice nurse was shocked. But in my heart I knew this was God’s timing.

God’s plans and God’s timing don’t always make sense to us. We expect them to, but we really shouldn’t. His ways are not our ways.

We’re not called to understand, we’re called to trust.

We’re not called to understand, we’re called to trust. #grief

I’ve reminded myself of that over and over the past three years. Does it get easier to trust?

This isn’t a cancer story, it’s a God story, and it’s not finished yet. God is still working. I see it every day. His grace is truly sufficient.

All of our stories are God stories, because without Him our stories have no meaning. Without God there’s no reason for the stories.

Without God our stories have no meaning. #grief

What story is God weaving in your life? Maybe it’s hard one that you don’t want to tell. Can I tell you that whatever it is He’s not finished yet? The story may not make sense to us here in this life, but God knows what He’s doing. From beginning to end He knows the path has for you. Just trust Him, and see where the story goes.

Maybe your story is one that you’re meant to ponder in your own heart, or maybe there’s someone out there who needs to hear your story. Just remind them that it’s a God story, and He’s the author. Use your story to point others to Him, and to bring Him glory.

The Sunday after my husbands passing, our teen pastor posted a song on Facebook. It was the song that had become my prayer that day. I had heard it when a sweet couple sang it in our church. I still ministers to me every time I hear it. I hope it blesses you on your journey as well.

I’m linking up with Christian Blogger Community, Sitting Among Friends, and Grace & Truth.