Whose Armor Are You Wearing?

Have you ever tried wearing two sets of armor at once? It can be a real challenge. The first hurdle is deciding whether to put on one whole suit of armor and then layering the other on top of it, or to layer each individual piece.

Whichever way you do it, just getting the armor on is problematic. Then there’s actually wearing it. All those pieces rubbing and bumping together, making movement extremely difficult.

It’s nearly impossible to see when you’re wearing two helmets. That’s if you can turn your head at all.

Two swords sounds like a good idea. You’ll be able to whack at your enemies with two hands just like a fantasy movie ninja. Awesome! That is until you realize that you also have two shields.

Okay so I don’t actually know from experience what it would be like to wear two sets of armor. I’m going to go out on a limb and guess that you don’t either. Most of us probably won’t ever have the opportunity to try on two sets of armor. Probably. So lets put it in more reasonable terms.

Would you wear two pairs of shoes at the same time?

What about two winter coats?

Of course there are exceptions, but for the most part we wouldn’t try to wear two of any of those things. It would bulky and impractical. In the case of the shoes, I’m having trouble picturing how you would even get two pair on.

The same is true for spiritual armor as well. We can’t wear two sets. It won’t work.

Yet before I’m even out of bed in the morning I find myself already fastening on my own armor. 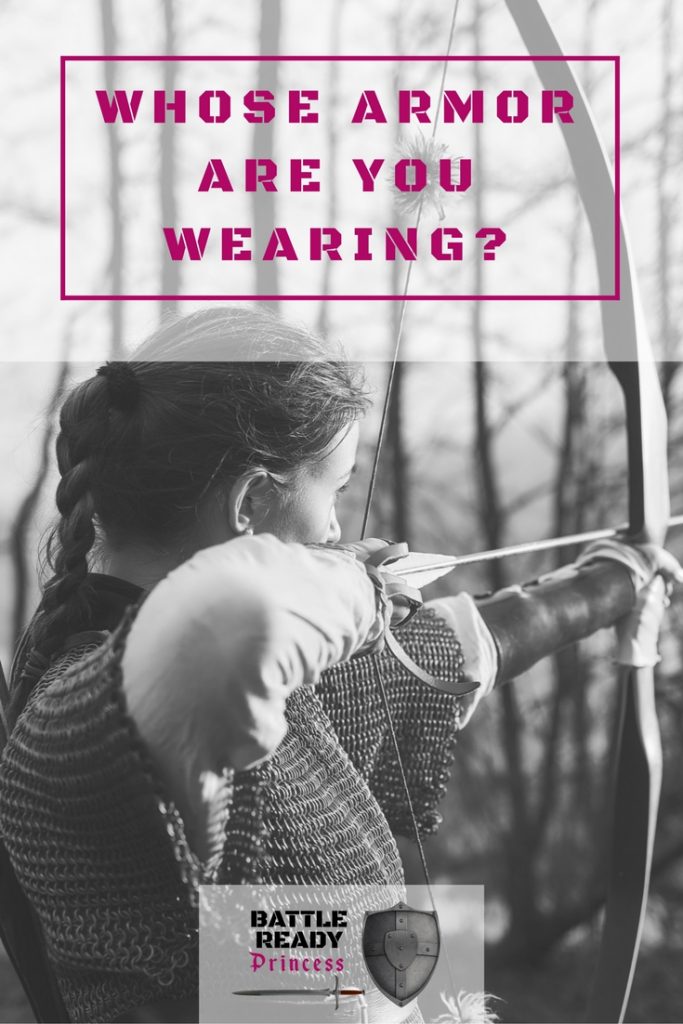 Instead of having on the girdle of truth, I’ve bound myself up in lies. The lies of the devil, the lies the world tells me and the lies I tell myself.

Instead of the breastplate of righteousness, I cover myself with my own self-righteousness.

Instead of the helmet of salvation, I’ve forged a helmet of good works.

The sword I carry is not the sword of the spirit, but I carry a sword forged of my own stubborn will.

None of this armor will help me. None of it will protect me or prepare me to stand against the wiles of the devil.

My own armor does nothing for me except make provision for my flesh. Something that God’s word warns us not to do. Instead we are to put on Christ.

But put ye on the Lord Jesus Christ, and make not provision for the flesh, to fulfil the lusts thereof. Romans 13:14

Instead of our own armor, we need the armor of light.

The night is far spent, the day is at hand: let us therefore cast off the works of darkness, and let us put on the armour of light. Romans 13:12

In order to put on the armor of light, God’s armor, we have to take off our own armor first.

That ye put off concerning the former conversation the old man, which is corrupt according to the deceitful lusts; And be renewed in the spirit of your mind; And that ye put on the new man, which after God is created in righteousness and true holiness. Ephesians 4:22-24 (Emphasis added.)

We can’t be affective soldiers if we are wearing faulty armor. The armor we wear must be the best. It must be God’s armor. He provides for us everything we need. But we have to be willing to give up our own armor first.

Then we put on the girdle of truth that keeps us from falling prey to all of the lies surrounding us.

We cover ourselves with the breastplate of righteousness that protects our hearts, and keeps them from growing cold.

Our feet we protect with the Gospel of peace that allows us to see others as Christ sees them and to love them as Christ loves them.

Then we take up the shield of faith that will quench the fiery darts of the wicked.

We put on the helmet of salvation that gives us peace to know that we are safe in His hands.

The sword we carry is the Holy Spirit of God working by His Word in us and through us, cutting away the old and making all things new again.

Then there is prayer. The piece of the armor that we absolutely cannot forget.

We often hear that our armor must be prayed on, and that is true. But prayer is so much more important than that. The verse above says: “praying always.” We pray on the armor, but we can’t stop there.

Prayer is not only how we put on the armor, it is the underpinnings of the armor, a vital piece of the 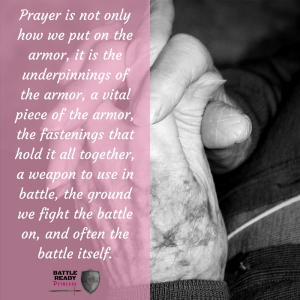 armor, the fastenings that hold it all together, a weapon to use in battle, the ground we fight the battle on, and the battle itself.

Instead of relying on myself, I must rely constantly on God. No matter how hard I try, eventually my own efforts will fail. My armor will let me down every time. But God never fails, and His armor is never faulty.

But we have to make a conscious choice each and every day to take off our armor, and to clothe ourselves in God’s armor. Only then can we have hope to stand against the wiles of the devil.

Put on the whole armour of God, that ye may be able to stand against the wiles of the devil. Ephesians‬ ‭6:11‬

Monuments, Landmarks, And Bridges: A Pause To Reflect